NASA is seeking input from the science community that will culminate in a decision to support studies of three or four large missions to prepare for the next Decadal Survey in Astrophysics. A white paper released by NASA's Astrophysics Division lists four candidate missions, including a Far-Infrared Surveyor mission. This mission is listed because it was recommended in the Astrophysics Roadmap, Enduring Quests, Daring Visions, which you can find on the same web site. The community now has an opportunity to comment on the candidate missions and to recommend additions to or deletions from the initial candidate list.

Community input will be provided to NASA's Astrophysics Subcommittee through its three Program Analysis Groups (PAGs). The Far-IR Science Interest Group comprises all interested members of the community and reports to the Cosmic Origins PAG (COPAG).  Recently, the COPAG issued an RFI for short 1-2 page whitepapers addressing the candidate missions.  The listing of recent meetings as well as the submitted whitepapers can be found on the COPAG community input page.  This call for whitepapers, along with other aspects of the large mission study schedule and NASA's charge to the PAGs was discussed during the most recent COPAG town hall meeting on 10 March 2015.

The Far-IR Science Interest Group will hold the next workshop in a long series of such meetings on the Caltech campus in Pasadena from 3-5 June, 2015. This workshop will follow up on discussions held during the May 2014 workshop Bringing Fundamental Astrophysical Processes Into Focus: A Community Workshop to Plan the Future of Far-Infrared Space Astrophysics, and the May 2008 workshop Far-Infrared Astronomy from Space:  A Community Workshop about the Future. The purpose of the June 2015 workshop is to prepare a community response to the NASA white paper.

Coherent community support for the Far-Infrared Surveyor mission is the best way to ensure that the mission will be selected for study and technology investment in the years leading up to the 2020 Decadal Survey. Workshop participants will develop the science rationale for the Far-IR Surveyor, and decide which mission architecture best provides the essential measurement capabilities at an affordable cost. Examples of architectures under consideration are a direct detection cryo-cooled interferometer, a cryo-cooled single aperture telescope, and a passively cooled single aperture telescope. In preliminary discussions, a consensus has emerged that affordable is likely to be approximately $1-2 billion. A mission in this cost range could enter development in the latter half of the next decade if it is prioritized in the Decadal Survey. 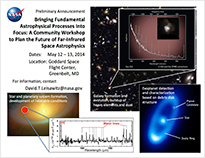 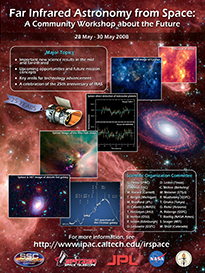